The many faces of GM foods in Australia.  What is GMO? What are we being told? Most scientific evidence suggests these foods are harmless, but lack of evidence of harm isn’t evidence of safety – think about the asbestos de-barkle. History has proven that adequate research is not done prior to a product being used and many times is not until decades down the track the full ramification of the use of these toxic products are realised. Sadly it is then too late!

Enjoy a conversation with Fran Murrell, MADGE, who is in the thick of the GMO action in Australia.

Supermarkets are now full of foods with ingredients that could be derived from genetically modified (GM) crops or from animals given GM feed. As a parent how do you know if what you are buying is GM or Non-GM? Current labeling regulations make it almost impossible to know. It’s likely you are eating genetically modified (GM) foods every day so it’s useful to know what they are, their impact and if you choose how to avoid them.

How did our grandparents breed new types of plants?

Previously breeding of plants was completed by cross-pollinating plant breeds, this was done by taking the male pollen from one plant and putting into the female flower of another to create a new sort of tomato. This is basically how plants were bred until the 1930s, when new breeding techniques, including hybridization, were developed[1].

The discovery of the structure of DNA in the 1950s led to much experimentation.

What does genetically modified mean?

Genetic Modification (GM) is a new type of plant breeding that developed during the 1980s. It has more similarities to a viral infection than to traditional breeding. Scientists take DNA and genes from bacteria, viruses, plants, animals or create synthetic and chimeric genes that have never existed before. These are used to make a ‘gene cassette’, which is inserted, into a plant cell.

The two main ways to force this gene cassette into a plant cell are:

The idea is to change the way the GM plant functions. The main ways GM plants have been altered are:

Newer types of GM have been developed that edit genes and stop them being expressed. These new GM methods carry the same risks as previous GM breeding.

Did you know you are probably eating GM foods everyday?

So why do I say you are probably eating GM foods everyday?

To what extent are GM foods grown in Australia?

GM cotton was first grown in Australia in 1996. Currently nearly all the crop is GM. Three different types are grown:

How many farmers are growing GM canola crops in Australia? 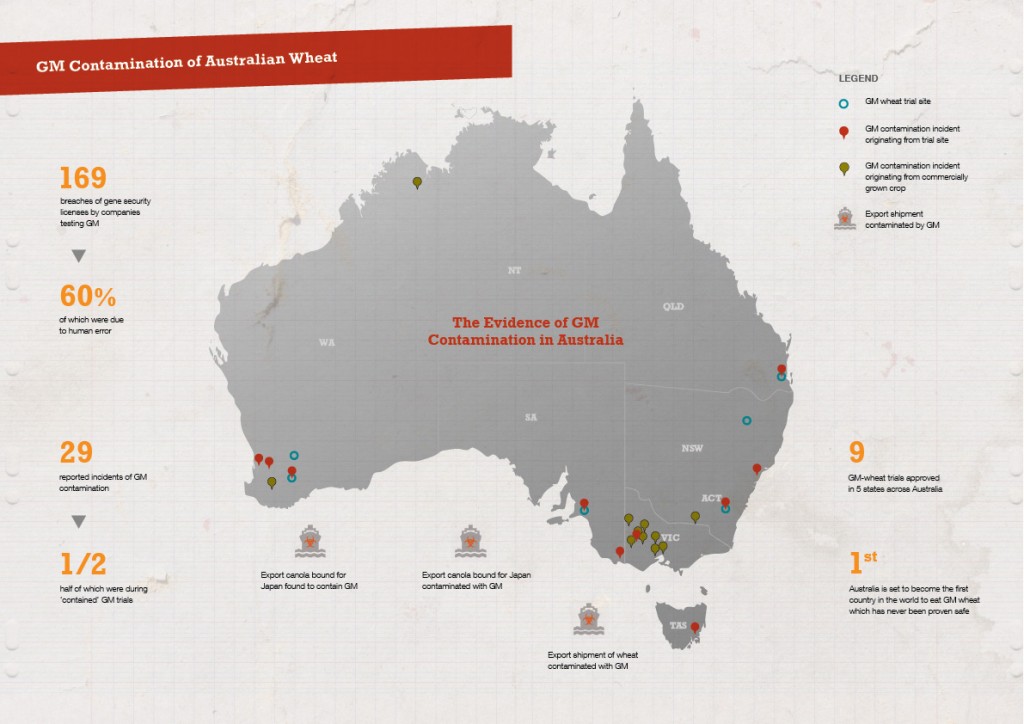 Map of evidence of contamination due to GM crops across Australia

Where can our members go for additional information and your research material?

FRAN MURRELL is part of MADGE: Mothers Are Demystifying Genetic Engineering, a group that aims to raise awareness about safety concerns relating to genetically modified food. In 2007 she joined together with two other women to form MADGE to let mothers and others know what is happening to our food. She has given talks and workshops on GE and other food technologies in Australia and overseas. She was recently one among seven to deliver a message to 2014 G20 Leaders in Brisbane. She has written articles and produces a monthly digest on GE food and related issues. http://www.madge.org.au

Looking for a speaker, keynote or panalist for your next event. Contact Fran